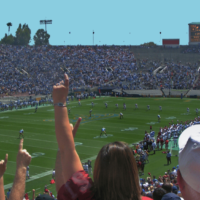 On Tuesday, the Big Ten, ACC and Pac-12 announced a formal alliance regarding matters including College Football Playoff expansion and non-conference scheduling. The three conferences formed the alliance in the wake of Texas and Oklahoma’s move to the SEC, scheduled to go into effect in 2025. The other eight teams currently in the Big 12 have not found new homes for future years. Per a conference statement, the alliance between the Big Ten, ACC and Pac-12 includes a “scheduling component for football and men’s and women’s basketball.”