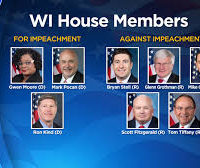 MADISON, Wis. (AP) — No Republicans in Wisconsin’s congressional delegation joined with the state’s Democrats in voting to impeach President Donald Trump. The impeachment vote Wednesday came a week after Trump encouraged loyalists at a rally to “fight like hell” against November’s election results before they stormed the U.S. Capitol. All five of Wisconsin’s Republican House members voted against impeachment, while all three Democrats were in favor. Security continues to be increased at the U.S. Capitol and at state capitol buildings around the country ahead of threats of violence starting Sunday. Gov. Tony Evers activated the Wisconsin National Guard and is sending 500 troops to Washington, D.C.