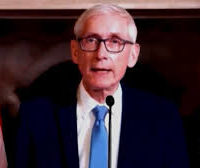 Governor Tony Evers dedicated his state of the state address to the more than 5,000 Wisconsinites who have died from COVID-19 and the families they left behind.  The governor called for a moment of silence to honor the lives of  Wisconsinites lost to COVID-19.   Evers set both a somber and optimistic tone with his State of the State speech. In his Tuesday night speech, Evers says the challenges posed by the coronavirus pandemic in an “unrelenting” 2020 will carry over into this year but that “we aren’t defeated.”    Evers also called on the legislature to update Wisconsin’s antiquated unemployment payment system and spend nearly $200 million to expand broadband access.  The governor announced he was calling a special session for the legislature to fix the beleagured unemployment system.  Evers pre-recorded his speech. Lawmakers gathered in the Senate and Assembly to watch it on television monitors.