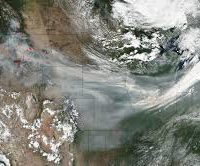 As wildfires continue to ravage western states, that haze that you may have noticed in the sky over the last couple of days is smoke particles from the fires.  National Weather Service meteorologist, Chris Stumpf, says it’s not your imagination.  Satellite images show smoke from the fires has drifted across the country, including over Wisconsin.  Stumpf says winds in the upper levels of the atmosphere have shifted to the west, bringing a lot of the smoke across much of the country.   And he says it will probably be with us for several days.   Stumpf says the good news for firefighters in the west is that winds have shifted bringing moisture from the Pacific Ocean to the region.