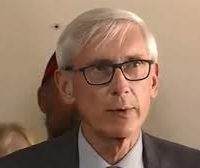 MADISON, Wis. (AP) — Wisconsin Gov. Tony Evers’ office says there is no written record of anyone authorizing one of his aides to secretly record a phone call with top Republican lawmakers. Evers has refused to say who made the May 14 recording of a conference call that involved him, his aides and GOP legislative leaders. The Democratic governor has promised that secret recordings won’t happen again.  Evers’ office responded to an open records request with a brief letter saying there was no record of anyone authorizing the recording. The letter also said Evers’ office had no other recordings of conversations with lawmakers.