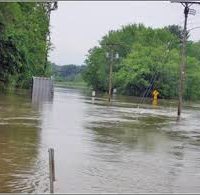 BALDWIN, Wis. (AP) — Some residents in one western Wisconsin village hit hard by hours of torrential rain were evacuated from their homes as flood water lapped at their doors and motorists who stood on the roofs of their flooded vehicles were rescued by law enforcement officers. A 70-year-old man from Emerald, Wisconsin, died after his minivan went off the road and became submerged in a ditch. The storms swept through the southern Twin Cities metro area before striking western Wisconsin overnight Sunday and into Monday where eight families in the St. Croix County village of Baldwin were moved from houses near a creek to a community center. Sheriff’s officials say at  least five motorists were rescued from rushing water on Highway 63 in the Baldwin area.,