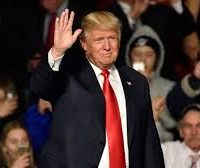 MILWAUKEE (AP) — President Donald Trump makes his first 2020 appearance in battleground Wisconsin for a rally that coincides with a Democratic presidential debate in neighboring Iowa. Counter-protests and other related events organized by both Democrats and the Trump administration were planned in Milwaukee ahead of the rally. The event was to be just across the street where Democrats will gather in six months for their national convention to pick a nominee to take on Trump. Prior to the rally, Trump’s son-in-law and senior adviser Jared Kushner was to hold an event touting the administration’s criminal justice reform efforts.