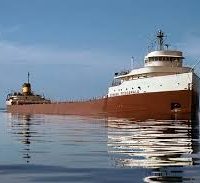 This weekend marked the 44th anniversary of the sinking of the Edmund Fitzgerald on Lake Superior.  The freighter left Superior, Wisconsin November 9, 1975 and got caught in a massive storm on Lake Superior.  The ship’s last radio contact was with the freighter Arthur M. Anderson on the evening of November 10.    All 29 crew members were lost.  Great Lakes Shipwreck museum director Bruce Lyon told AM 1170s Between the Lines program the ship almost made it across the lake, but disappeared from radar near the entrance to Whitfish Bay, about 17 miles from the eastern end of the lake.  The exact cause of why the ship went down remains a mystery but Lyon says the sinking of the massive freighter shows the power of the lake during a storm.  The tragedy was memorialized in Canadian musician Gordon Lightfoot’s well-known song.