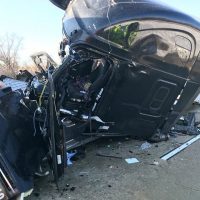 Two truck drivers were injured in a crash that shut down all lanes of I-41 Southbound near Addison on Thursday, November 7, 2019.

It happened just before noon while traffic was already down to one lane on I-41 due to construction.

According to the Washington County Sheriff’s Office, a semi approached too quickly and slammed into the back of two other heavy trucks.

The vehicle that took the initial hit, a straight truck, rolled onto its side outside the median.

The semi then crashed into the back of a second semi.

The driver of the first big-rig was trapped inside of the cab and needed to be extracted by a rescue team.

He was taken to a nearby hospital for treatment of non life-threatening injuries.

The driver of the second semi was also taken to a nearby hospital for treatment of injuries.

The driver of the straight truck was treated at the scene and released.

The crash caused a spill of diesel and other fluids, prompting a response from the Washington County Hazardous Materials Unit.

All lanes of I-41 Southbound near County Highway K and Highway 33 were closed for roughly three hours while crews worked to clear the scene.