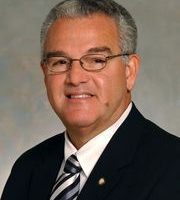 Wells and Tom Sonnleitner were charged Thursday with FIVE felony counts each of Misconduct in Office.

The pair is also accused of sending letters to area banks, assuring them that the public university would step in and help if the private foundation was unable to make payments.

That private foundation is now bankrupt.

Wells is set to make his initial appearance in court June 11th.