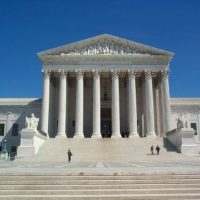 The Supreme Court’s liberals and conservatives appear divided about striking down a Wisconsin redistricting plan because it is excessively partisan.

The big question, after an hour-long argument Tuesday, is what does Justice Anthony Kennedy think.

The answer could reshape American politics.

Kennedy suggested that courts could be involved in placing limits on extremely partisan electoral maps.

But he did not tip his hand at all about whether the Wisconsin map that favors Republicans crossed a line and violates the Constitution.

There was little doubt about where the rest of the court stood.

The liberal justices appeared to favor the Democratic voters who challenged the Wisconsin plan.

The conservative justices were skeptical about striking down the state’s map or even involving courts in the inherently political process of redistricting.

Jay Heck is the director of the government watchdog group Common Cause in Wisconsin.

“The implications are enormous. Its not just for Wisconsin, its for those states which have Democratic majorities that have effectively disenfranchised voters with Republican candidates like Illinois and Maryland.”